Before you all think “Of course she’s going to say good things, Mary works at PPT” let me hold you up for one second and set it straight. Right now, I’ve got my client hat on. I’ve been a client since PPT opened its doors and in this time I’ve had my fair share of great results, but by far 2016 was my best yet. Once you see the pictures and read this testimonial, I know you will agree. 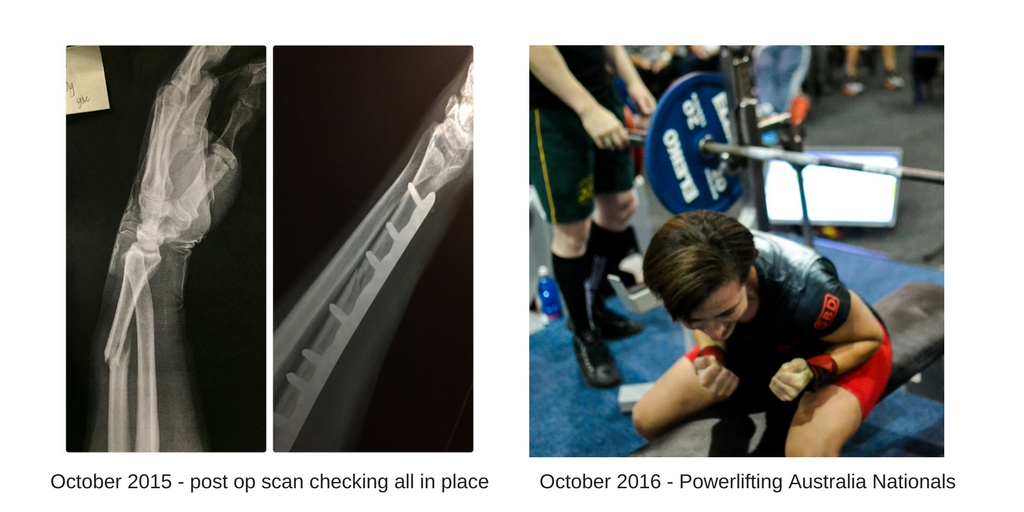 HOW? Sounds like an impossibility. No BS just results, that’s our motto, so with the guidance, support and knowledge of PPT trainer and my PL Coach Sean, we set some goals, executed a plan to get us there, and we did it.

We both knew this was going to be challenging. What was really helpful was that at no point did it ever get too hard. Through clear communication between the two of us, he could be responsive with programming to keep me working safely. At all times, I was kept informed of the process and why we were doing what we were doing. A great deal of time, effort, thought and research went in to my programming, I’ll be forever grateful for this care as without it, Im sure I would have jumped the gun and lifted more than what I should have and re-injured myself. Managing my impatience and frustration at the time wouldn’t have been easy! I’m sure at times I was a tough client.

So amongst the backdrop of a broken arm, surgery, weight loss, muscle loss and then wisdom teeth extraction, we were setting ourselves a goal of a July competition. Yep, 9 months after the break, I wanted to be back up on the podium.

With some very specific programming and under the direct, firm guidance of Sean we went from single limb training, light dumbbell work and then eventually I was stepping up to a bar again. I’m certain that without his direction, my dream to return to competition wouldn’t have become a reality.

When things felt good, I was so keen to push it, but he kept a close eye on everything I did and when he wasn’t around the rest of the PPT team of trainers were there keeping me in check too.  But that’s the PPT way, it doesn’t matter who you train with, all the trainers care for you, your safety and your results.

From the minute I started back, I had a July 2016 competition as my goal with a 40 kg bench. By the time I was ready to compete, it was July and I benched 57.5kg. Best part, my total on the day was enough to get me an invite to compete at Powerlifting Australia’s National competition in October that same year. This was my big goal when I started lifting, but after the break, I parked it in the back of my mind thinking it would never happen.

This turnaround would not have been possible if it wasn’t for the approach, dedication and hard work of Sean. He will consistently tell me “You did the work, you deserve it”. While that’s true, my results are a direct reflection of the plan that he set for me.

From the second I had broken my arm, Sean was already planning our approach. It wasn’t a question of IF I got strong again, but rather what was the best approach to GET me strong again. I had my doubts along the way, but when with his reassurance and visible progress, I had every faith he had me on the right track. There were lots of questions, and for each question that I threw his way he had done the research and had an answer.

I think you would struggle to find a better example of how a trainer has planned and programmed effectively to meet the needs of a client to get them the results they wanted. Here I was with one working arm, intent to keep training. I was fast losing muscle and strength post operation in the broken arm but had set myself some goals. This was a goal that I knew he believed was possible, and together I think our collective faith and trust in each other meant that we would achieve it.

Want more information on how PPT can work with you to help you reach goals that are important to you with an individualised approach to your training and nutrition, contact us here, our team will be in touch