I approached Sean about three years ago now because I was after a new personal trainer and I had been referred to him by some of my family members. Even though I knew a lot of his clients I did still ‘shop around’ and have meetings with a handful of trainers so I could see for myself how he compared to others in the industry. Straight off the bat I knew that this was a guy who was passionate about his profession, his business and his positive and straight down the line attitude was going to suit me perfectly. 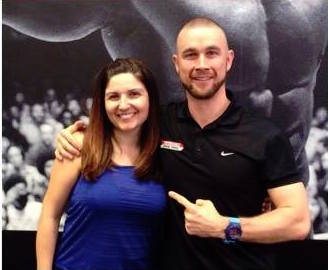 What I really respect about Sean is the effort that he puts in to make sure that he provides me with the most information and background to what we are doing and why we are doing it. Sean has mastered the perfect balance of being firm yet understanding and positive towards his clients. He brings out the best in me and I find myself pushing myself to match his high but achievable expectations.

After training with Sean for about a year and half I informed him that I was pregnant with my third child. I had previously never exercised while pregnant so I wasn’t sure how I was going to go if I continued exercising during my pregnancy.  Sean immediately started researching and planning what modifications we would make so I could continue training with him twice a week. Every session he had more research and information to share with me which was such a relief for me and kept me confident with what I was doing. He always monitored how I was feeling during the sessions and pushed me just enough so I wasn’t over exerting myself.

Because of Sean’s guidance I had the best pregnancy out of all of my pregnancies and didn’t get the sciatica I was expecting that I had in my previous pregnancies. I managed to train up until 4 weeks before I had my third son and my recovery after having him naturally was also the best out of all three which I can definitely say was because of my training with Sean. I only had a 1cm gap between my stomach muscles rather than the 4 cm I had after my previous pregnancies and 6 weeks after having him I was back into my training just as strong as before.

I am so happy to have found such a knowledgeable trainer that I respect and trust to bring out the best in me and I would recommend him with confidence to anyone looking to focus on their health and fitness.

Continuing on with your training while pregnant can be a big step for some, if this is the case for you and you want some information or guidance, then get in touch with PPT.